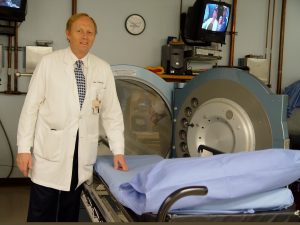 Like the Afghanistan and Iraq veterans in the study, Vietnam veteran Lieutenant Mike Meyers, suffered serious head injuries while serving in the Air Force and the Army. The injuries negatively affected his balance, hand-eye coordination, and memory. In addition, he experienced crushing migraines and suicidal thoughts. He was treated with methadone and muscle relaxers, but these medications hindered his ability to work. Although Lt. Meyers was not included in the study, as a patient of Dr. Harch he underwent the same HBOT treatments and showed marked relief from his symptoms.

In the study, Dr. Harch administered 40 sessions of HBOT to veterans with PPCS, most of whom had also been diagnosed with post-traumatic stress disorder (PTSD). Nearly all the veterans showed improvement like Lt. Meyers.

“Not only did they improve cognitively and symptomatically and their depression and anxiety were reduced,” Dr. Harch says, “but in particular, when we finally got all of the data in front of us, we found that nearly all of them who were thinking of suicide before the study started were no longer suicidal or having panic attacks.” As for Lieutenant Myers, it’s been four years since his last migraine.

Furthermore, before HBOT, the veterans’ brain scans were significantly abnormal compared to brain scans of a control group. After HBOT, the brain scans of both groups were statistically indistinguishable in 75 percent of abnormal areas. The HBOT study, which was recently published in Medical Gas Research, strongly suggests that the treatment stimulates tissue growth, halts inflammation, and deactivates cell death, Dr. Harch says.

In a policy reversal, the Department of Veterans Affairs recently authorized the use of HBOT for some veterans suffering from PTSD. “There is nothing more important to us than caring for our nation’s veterans, and that care must include finding different approaches that work best for them,” VA Secretary Shulkin said.

Dr. Harch, an American Board of Physician Specialties® (ABPS) Diplomate in Emergency Medicine, personifies the commitment of the ABPS to high-level patient care through continued study and innovation. For more information about the ABPS, our mission, and the eligibility requirements for earning specialty certification with one of our Member Boards, contact us today.