Skip to content
Healthy People Make for a Healthier Planet 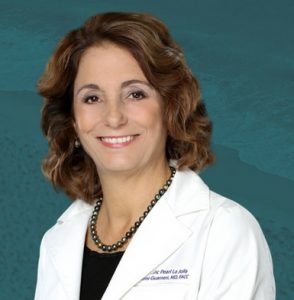 Mimi Guarneri, a founding board member of the American Board of Integrative Medicine® (ABOIM®) and a board-certified physician in cardiovascular disease, internal medicine, and integrative holistic medicine, believes that next to health care, climate change is one of the most critical issues facing us today. “Practitioners need to be concerned about climate change from a health care perspective because it’s changing the planet in a way that’s affecting people,” she says.

Dr. Guarneri asks us to imagine the emotional impact of climate change – for instance, how it affects communities being consumed by flooding, as in Bangladesh, or wiped out by fires, as in California, or devastated by a hurricane, as in the Bahamas. The impact is tremendous. People lose their homes, families, and livelihood. “They lose, in essence, the social determinants of health,” she says. “Their whole infrastructure is completely disrupted.”

She asks us to also consider the medical impact of climate change. In Pakistan, for example, she says, temperatures have exceeded 122 degrees Fahrenheit, and people have died in the streets from heat.

Another huge concern for Dr. Guarneri is drinking water. Drought or the inability to obtain clean drinking water has led to health problems in several countries. Consider El Salvador, she says, where among farmers, there have been alarming levels of kidney failure because of dehyrdation and the lack of clean water.

We must come to terms with the health problems wrought by pollution, Dr. Guarneri says. Fortunately, the World Health Organization has recognized that air pollution is the leading cause of stroke. Of course, pollution not only affects the air we breathe but also contaminates our drinking water. Depending on the industries in the area, heavy metals such as mercury, lead, and cadmium can run off into the drinking water. These heavy metals are linked to cardiovascular and kidney disease.

Infectious diseases are also becoming more prevalent as a result of climate change. As the tropics have grown warmer, the life cycle of the mosquito has lengthened, and more cases of vector-borne diseases such as chikungunya, Zika, West Nile, and dengue, have been reported farther north. “Vector-borne illnesses are almost commonplace now,” she says.

So, how can medical practitioners discuss the climate with their patients so that they can take control of their health and their environment? In short, Dr. Guarneri says, health professionals should advise patients that what’s good for their health is good for the planet and vice versa. “And we also have to be the change we seek,” she says. “For example, instead of driving to work and polluting the environment by adding to the particulate matter in the air, walk to work. It’s good for your health and the environment. You’ll get exercise as well as reduce your carbon footprint. If you do have to drive, drive in an electric vehicle, or use public transportation.”

She also recommends that we eat less meat and more vegetables. The agricultural industry contributes hugely to methane production. “Have one or two days a week during which you eat no meat,” she advises “A meatless Monday, for example. A diet that includes more food like salads, lentils, and so on, is not only healthier for us, it also helps to reduce the industry’s methane footprint.”

We can also avoid using plastic, Dr. Guarneri adds. “Just say no to plastic bags.” Much of the plastic we use has not been recycled but instead has become part of the debris patch floating in the Pacific Ocean, in what is called the Great Pacific Garbage Patch. Plastic gets into the food chain and kills off marine life and animals. Rather than using a plastic bag, opt for a cloth bag, or a box, Dr. Guarneri advises.

She points out that adults should be humbled by the actions of young people who are taking action to save our planet, which has been industrialized and materialized to an extent that’s incompatible with supporting life. Via health care systems, farmers’ markets, and community-supported agriculture, people are radically changing communities with health care models that ought to be utilized everywhere.

To learn more about Dr. Guarneri’s holistic approach to health care, which includes clean water, fresh air, and a healthy diet, contact the American Board of Physician Specialties® (ABPS). The ABOIM is a Member Board of the ABPS.